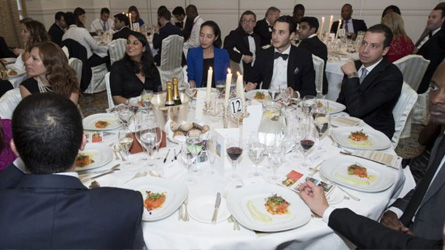 Databank Agrifund Manager Limited (DAFML), the private equity affiliate of Databank Group, reaffirmed its leadership in the SME investment space by being recognized at the Private Equity Africa (PEA) Summit and Awards in London, UK. The event, which was held on 5 June 2014, highlighted the growing emergence of private equity as an asset class in African investments and the attraction of reputable companies that can improve their capital structures via private equity investments.

The “Small Cap Deal of the Year” award went to DAFML, Databank for its investment in Guanomad, an organic-fertiliser processor in Madagascar and the “Special Recognition Entrepreneur” award, the first of its kind, co-sponsored by Private Equity Africa and Forbes Africa, was awarded to Tosan Jemide, CEO of Topcrust, a food-processing company and an AAF SME Fund portfolio company, based in Nigeria.

Brian Frimpong, Managing Partner – DAFML, received the Databank award. He emphasised the quality of teamwork that has driven the core success of the AAF SME Fund, which was launched in February 2012.

Brian asserted that “…it takes a high calibre of talented individuals in a team to select high-quality transactions that have a ripple effect of supplying sufficient amount of capital, building sustainable enterprises and carving out measurable impact for the communities in which these businesses operate.” Brian also praised Tosan Jemide, CEO of Topcrust, for “…his passion and dedication to growing Topcrust and reflecting the examples of sound leadership that encourages a partnership with a private equity firm such as Databank.”

Dennis Matangira, Senior Managing Partner – DAFML, affirmed “…Erick Rajaonary of Guanomad and Tosan Jemide of Topcrust are excellent examples of pioneers in their respective niches that deserved recognition. Databank shares in their success and believes that from its interaction with entrepreneurs, the future looks promising.”

Since AAF SME Fund’s investment in Guanomad in July 2013, the portfolio company has received various recognitions. This PEA award attributed to Guanomad comes on the heels of the company winning the “Outstanding Small and Growing Business” award at the 2013 Africa Awards for Entrepreneurship, sponsored by the African Leadership Network.

The AAF SME Fund is a sub-fund of the Africa Agriculture Fund (AAF), managed by Phatisa.

The AAF TAF is primarily funded by the EU, managed by the International Fund for Agricultural Development (IFAD) and implemented by TechnoServe. The project received additional donations from the Alliance for a Green Revolution in Africa (AGRA), Italian Development Cooperation and the United Nations Industrial Development Organization (UNIDO).